Meat Rabbits; or How Children Can Provide Substantial Assistance on a Homestead, Part 1 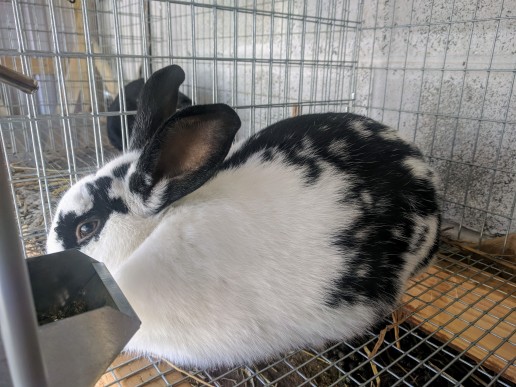 A few years ago we began asking the children this question: “If you could pick one farm project, what would it be?”  We got many wide-ranging answers, some realistic, some not.  One answer was given by our son – meat rabbits.  Our first step was to have him do what free and readily available research he could.  Once he exhausted our own home library, we bought the Storey’s Guide to Raising Rabbits, a pre-owned copy of course.  The Storey’s Guide series are one of our go-to introductions to any topic.  They are well-written by experts in the specific topic relevant to each book, they start from the beginning specifically for someone with no knowledge of the topic, and they go into enough detail that anyone could start that project without a more advanced book.

After he completed the Storey’s Guide and wrote a few two-page research papers over a one year period, we were satisfied that he not only had enough motivation to take on this project, but also had enough knowledge to get it started and learn more as he was working.  After luckily finding four unwanted rabbits close to home – we were told they were all females (does) – and a basic wooden hutch which the family had constructed for them, we were ready to begin the project. 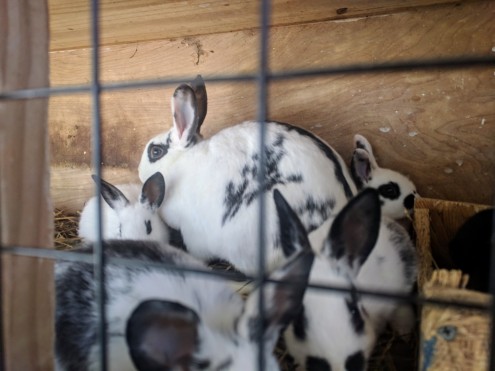 Upon arrival at our farm, we discovered that one of these rabbits was in fact a male, giving us one buck and three does – a perfect ratio for a small breeding operation.  What we didn’t discover until a week later was that they had already been sexually mature for long enough that one of the does was already pregnant. We found this out when we woke to a litter (kindle) of babies (kits) one morning, forcing us to move along with this project a lot faster than we had intended.  We had planned on letting our son care for these rabbits for a few months, learning and getting experience before tackling the task of raising kits.  Necessity being the mother of invention, we threw ourselves into making a passable system for raising kits.  It became even more necessary a few days later when another doe kindled unexpectedly.  When it rains it pours.  We now had 12 kits and four barely adult rabbits, and one very in-over-his-head 11 year old boy. 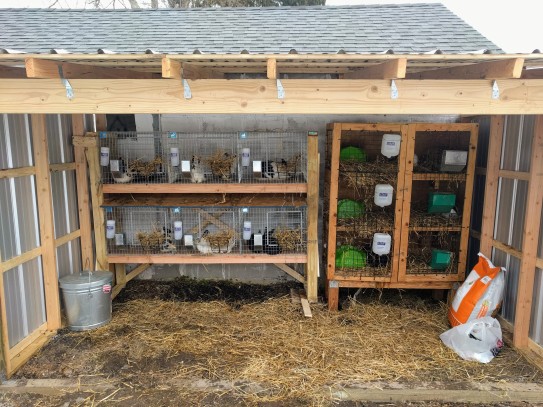 Over the next few weeks we earnestly worked to construct a rabbitry that would realistically be able to handle the plan – one buck, three does, each doe on a three month schedule, therefore one kindling per month with possibly up to 10 kits at each kindling.  Our son did the math and this schedule would produce on average two 5 pound rabbits each week for butchering.  Each rabbit dresses out to about 50-60% of live weight, meaning twice a week we would have 2.5 to 3 pounds of rabbit meat for supper.  Given our family size this is the perfect amount of meat for one meal. 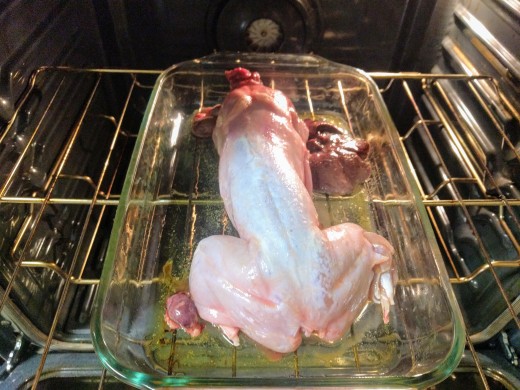 I had read for years about meat rabbits and their propensity for breeding like…well…you know.  This result was truly beyond what I had expected though.  Our now 12 year old son provides us with two meals a week of extremely low fat, low cholesterol, high protein fresh meat for a lower total cost than the cheapest on-sale chicken thighs you can find.  If you know anything about how those chicken thighs are produced and processed, you can understand how awesome this feat really is.

I skinned and gutted the first few rabbits myself while my son watched and learned, and the other day he did one completely by himself while I just supervised and stepped in when he needed my help.  We are so grateful to our son for working for our family in this way, and we make that known each and every time we cook up one of his rabbits.  It is a wonderful sight to see a 12 year old boy taking such pride in his work, and a wonderful feeling to know that he can have that sense of satisfaction in providing for his family.

Much more to come on this topic later… The Rabbitry, Cooking Rabbit, Rabbit Furs, Rabbit Economics, over time I will cover the details in depth.

One response to “Meat Rabbits; or How Children Can Provide Substantial Assistance on a Homestead, Part 1”